How to Protect Yourself from Sleep Apnea During Pregnancy 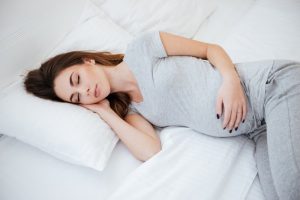 Do you find yourself dozing off several times a day, even after a full night’s rest? If you’re a new parent, that’s to be expected. But you’re still pregnant – your little one hasn’t even been born yet! Sleep disturbances are actually common during pregnancy. In fact, more than 75% of pregnant people have said they experienced them. Often, these interruptions are caused by sleep apnea, which can have serious consequences for both you and your baby. That’s why you need to be aware of the risks of sleep apnea during pregnancy so that you can protect yourself and ensure a successful, healthy birth.

The Link Between Pregnancy and Sleep Apnea

During pregnancy, heightened levels of estrogen can cause mucus membranes in the nose to swell. This increases the likelihood of congestion, which makes breathing through the nose more difficult. When you work harder to breathe, your airway in general becomes more swollen and restricts airflow even further. As a result, your breathing may be interrupted frequently while you sleep.

Weight gain can also contribute to sleep apnea during pregnancy. Excess fat tissue around the neck can easily lead to an obstructed airway.

Sleep apnea can have disturbingly serious consequences on the body, even for people who are not pregnant. Because of the multiple lapses in breathing, you’ll get less oxygen overall, which increases your risk for high blood pressure and heart attack. You also won’t achieve as much restful sleep as you need, causing daytime exhaustion (increasing the risk of car accidents due to drowsy driving), depression, and anxiety, among other health issues.

The health of your yet-to-be-born baby could also be impacted by sleep apnea during pregnancy. Sleep apnea has been linked to a higher risk for gestational diabetes and preeclampsia, both of which can lead to premature birth. In the worst-case scenario, your baby could even be stillborn.

What You Can Do About Sleep Apnea During Pregnancy

First, it helps to recognize some of the common symptoms of sleep apnea. Ask your partner if they have heard you snoring loudly or making gasping or choking sounds at night. You should also ask yourself if you’ve been feeling constantly fatigued during the day or waking up with a sore throat. After you’ve gotten tested for sleep apnea, you can explore your options, such as seeing a sleep dentist for oral appliance therapy or switching up your sleeping position (sleeping on your back can worsen sleep apnea symptoms compared to sleeping in your side).

Sleep apnea might not seem that serious at first, but ignoring it for too long could be dangerous for you and your family. Call your doctor or dentist right away if you notice any sleep apnea symptoms; that way, you can your baby can enjoy the benefits of a good night’s rest!

Dr. Alex Naini is a dentist in Vienna, VA who is an active member of the American Academy of Dental Sleep Medicine. She also has earned a Fellowship with the prestigious Las Vegas Institute for Advanced Dental Studies. Her extensive training allows her to deliver custom oral appliances to help her patients comfortably keep their airways open and sleep undisturbed. If you’re looking for ways to manage sleep apnea during pregnancy, contact Dr. Naini’s practice at (703) 827-8282.

Sorry, the comment form is closed at this time.

As Seen On & Featured In